Please answer a survey to help Region 13 deliver an excellent program for you.

For divisions 6U, 7U, 8U, the team spreadsheet has a new column, "How do you want your name to appear on the trophy?" Please tell your coach and team manager.

If your 10U-14U player would like to play in the Myles Standish Thanksgiving Tournament or All-Stars in the winter, sign up for tryouts. Details below.

Plan to join the coach meeting on Tuesday October 5 from 7:30-9:00. The following week, it'll be on Wednesday October 12, and we'll cycle through the days to get everyone.

Your roster has a Ratings tab. It's time to provide a preliminary evaluation of each of your players. Follow the guidelines, also on ayso13.org -> Volunteers -> Coach. We do this to help coaches think objectively about each child's progress. It's also practice for the end-of-season ratings that will be used to form balanced teams for next year, and helps select players for the tournament teams and All-Stars.

To coach an All-Stars team, apply online by October 16.

Please mark your availability for each game. This will help substitute referees know where to go.

See more by subscribing to the Region 13 calendar

Volunteer of the month

George Hervey really stepped up to make this soccer season come together. As the coach administrator of Boys' 6U and Boys' 7U, he helped hundreds of parents start their soccer parent adventures. George has been volunteering in Region 13 for as long as anyone can remember, even when he was working in the Bay Area and commuted home for soccer Saturdays. This year, George Jr, Brooke, and Connor are playing soccer, and he's coaching them all. Why? As he says, "I can't think of anything else I'd rather be doing with my Saturdays!"

Pandemic ain't over yet

There have been no outbreaks because of soccer, and let's keep it that way! Players still wear masks during games in 12U and younger, where players tend to bunch up. Let's also use common sense! Masks should fit, because they only work if they cover the mouth and nose. On hot days, Referees may add time for socially distanced rest breaks.

AYSO is for every child, and volunteer, to grow to the best of their abilities. To support this, the coach staff has developed a roadmap of typical player development that coaches use to assess and document progress. After the fall season (tournaments continue through December for 10U-14U), AYSO offers opportunities at many levels:

Grad Series is for 8U players to have a mini-season with offside and goalkeepers.

All-Stars provides an opportunity for players in the 10U-14U divisions to play at a higher level against teams from Area 1/C. Teams for the All Stars and the Myles Standish Thanksgiving Tournament are selected based on coach assessments and performance at the tryouts. Read about it here and then sign up for tryouts on Oct 31. There are 3 tiers of competition in All-Stars, and usually, about half the kids who try out are selected for a team.

To coach an All Stars team, apply online by October 16.

Anyone can also join Winter Stars, a less-formal development program on Sunday afternoons, starting in January.

Region 13 is also considering starting a mini-season for 5U players, with teams, referees, and, most important, halftime snacks. If you're interested in that, please say so on the parent survey.

It's good to learn multiple sports, so all these programs wrap up around when Lil' Kings hockey and baseball start in the spring.

Have a question about the Laws of the Game? Try Ask The Ref, and Steve Hawkins, Region 13's Advisor on the Laws Of The Game, will answer.

Q: Is a player allowed to keep kicking the ball while the player is on the ground? (No injury or foul has occurred)

A: If no injury is involved, the question for the referee is whether an offense has occurred. “Kicking the ball from the ground” is not an offense, but playing in a dangerous manner is an indirect free kick offense. So the question is when, in the meaning of the Laws of the Game, kicking the ball while on the ground becomes playing in a dangerous manner (sometimes referred to as “PIADM”). The concept of the playing in a dangerous manner offense is that by creating danger to herself or an opponent, the player unfairly makes it hard for the opponent to safely play the ball. So if there is no opponent around to unfairly interfere with, there is no PIADM, so keep playing. When there are opponents around, the referee has to make a judgment call. In general, if there are several players around the ball and one on the ground trying to kick the ball instead of getting up, it will likely be PIADM, as the other players can’t kick at the ball without kicking the player on the ground. But if the player is on the ground and just gives a quick kick to get the ball away before opponents are unfairly impacted, then no offense has occurred, and play should continue. This comes down to the judgment of the referee. The younger and less skilled the players, the more quickly the referee should decide that the player on the ground is creating an unsafe situation and call a PIADM offense against the player on the ground.

Picture of the week

Thanks, Eileen Flores, for this picture of the Black Pterodactyls on Sunday! In Region 13, 7U teams play on a special size of field, just right for their age, so you don't see them at Victory Park. Send in your pictures or tag @aysoregion13 on Instagram 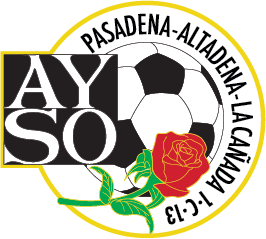 You are receiving this message because of your involvement with AYSO Region 13, 711 W. Woodbury Rd., Unit E, Altadena, CA, 91001, United States of America

View in browser | Stop sending me these emails | Sent by EmailOctopus